The lithium dilemma. Unveiling the displaced costs of going green

The push by governments around the world to increasingly electrify the transportation sector has led lithium demand to surge over the past few years. This Brief presents a trade-linked material flow analysis for lithium and an environmental assessment of the water-use impacts related to lithium mining and refinement. We find that the four key producing countries Australia, Chile, China and Argentina account for approximately 95% of lithium production, while the chemical refinement and lithium-ion battery (LIB) production happens largely in Asia. Total lithium production increased from 171,000 t Lithium Carbonate Equivalent (LCE) in 2014 to 247,000 t LCE in 2017, largely driven by rising LIB production for electric vehicles. We estimate that approximately 109 billion litres of fresh water were used to produce refined chemicals from both brines and ores. If the efficiency and sustainability of the lithium-vehicles supply chain is not improved, the associated environmental impacts will increasingly compromise the sustainability argument of electrified transport.

Mitigating the global climate crisis is among the most important challenges modern societies face. To date, the transportation sector is one of the major emitters of GHG emissions, accounting for approximately 25 percent of total emissions within the EU. Despite the gradual decline of total GHG emissions in the EU, the transport sector exhibits the opposite trend. To achieve the goal of zero net GHG emissions by 2050 set forth in the European Commission’s Green New Deal, individual and public transport should be increasingly electrified.

To this end, lithium is a key natural resource, as it forms the main component of lithium-ion batteries (LIBs), which are currently considered as the most promising technology to power individual and public transportation. Although a large portion of today’s manufactured LIBs are still being used in consumer electronics, demand for LIBs deployed in electric vehicles (EVs) is expected to rise dramatically over the next decade, thereby driving increased demand for resources such as lithium. However, while EVs are generally considered a more sustainable alternative to internal combustion engine-based private transport, scholars emphasise the negative environmental impacts associated with the extraction of lithium and the subsequent processing of lithium chemicals, such as high-water usage, waste, and land-use change that occur throughout the supply chain of LIBs.

Although several studies have been conducted to assess the environmental life-cycle sustainability of EVs compared to internal combustion vehicles, most of them focus solely on GHG emissions. However, it is important to develop a holistic understanding of the environmental impacts associated with the extraction and processing of lithium along the whole supply chain.

The lithium supply chain for electric vehicle LIBs as depicted in Figure 1 is a complex network of minerals containing lithium as well as actors, geographies, information and technologies that are involved in the movement and processing of lithium from its extraction to disposal or recycling. 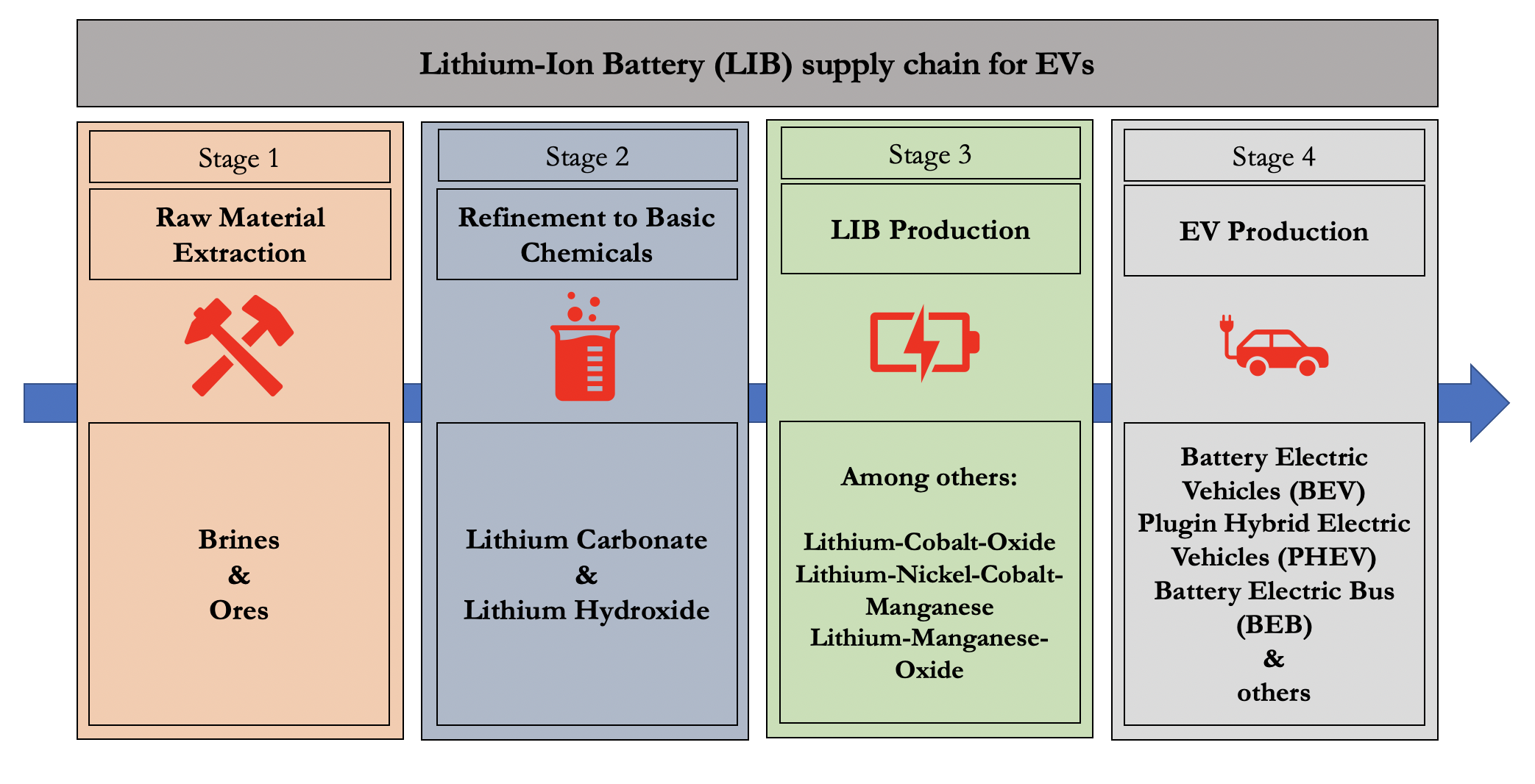 The production of lithium for LIBs begins with the extraction process from either brine (highly saline water), mainly sourced from the so-called Lithium Triangle comprising Argentina, Chile and Bolivia, or ores, most of which are located and extracted in Australia. When extracting from brine, the lithium-rich brackish-water is pumped to the surface into large and shallow ponds. Here, a slow solar energy-initiated evaporation process starts, until only a highly concentrated salt is left. Lithium extraction from ores usually takes place in large, industrially operated open pits. After extraction, the lithium-containing raw material runs through a refining process in which it is first processed into lithium carbonate (Li2CO3). Following this production step, the lithium carbonate can be further processed into other chemical derivatives, most notably lithium hydroxide (LiOH). While LIBs vary in the addition of manganese, nickel or cobalt, it is lithium that is included in all configurations, mainly as a compound containing either carbonate or hydroxide. In the following production process, the cells are assembled into battery modules, which are finally compiled into finished LIB packs.

We followed a two-step methodology. First, we replicated a trade linked material flow analysis by Sun and colleagues [1] and updated their 2014 data. We focused on the key mining countries, the most pivotal chemical producers, the most critical LIB producers and the top electric vehicle producers. This approach led to a set of 37 countries, including the EU-28. Additionally, we conceptualised all other nations as rest of the world (ROW). All production and trade data were converted to standardised units of Lithium Carbonate Equivalent (LCE). Second, we extended the lithium flow analysis by assessing the water requirements along the Lithium-EV supply chain. The findings gathered from literature were then triangulated to provide a holistic assessment of the environmental impacts at different stages of the EV supply chain.

Figure 2 depicts the summarised main findings of the trade-linked material flow analysis for the year 2017. The flows mark the bilateral trade between countries while the boxes symbolise the production of mined lithium, refined chemicals, LIBs and EVs, respectively. The last columns of boxes consolidate all trade flows of EVs and thus illustrate the stock of EVs after trade. 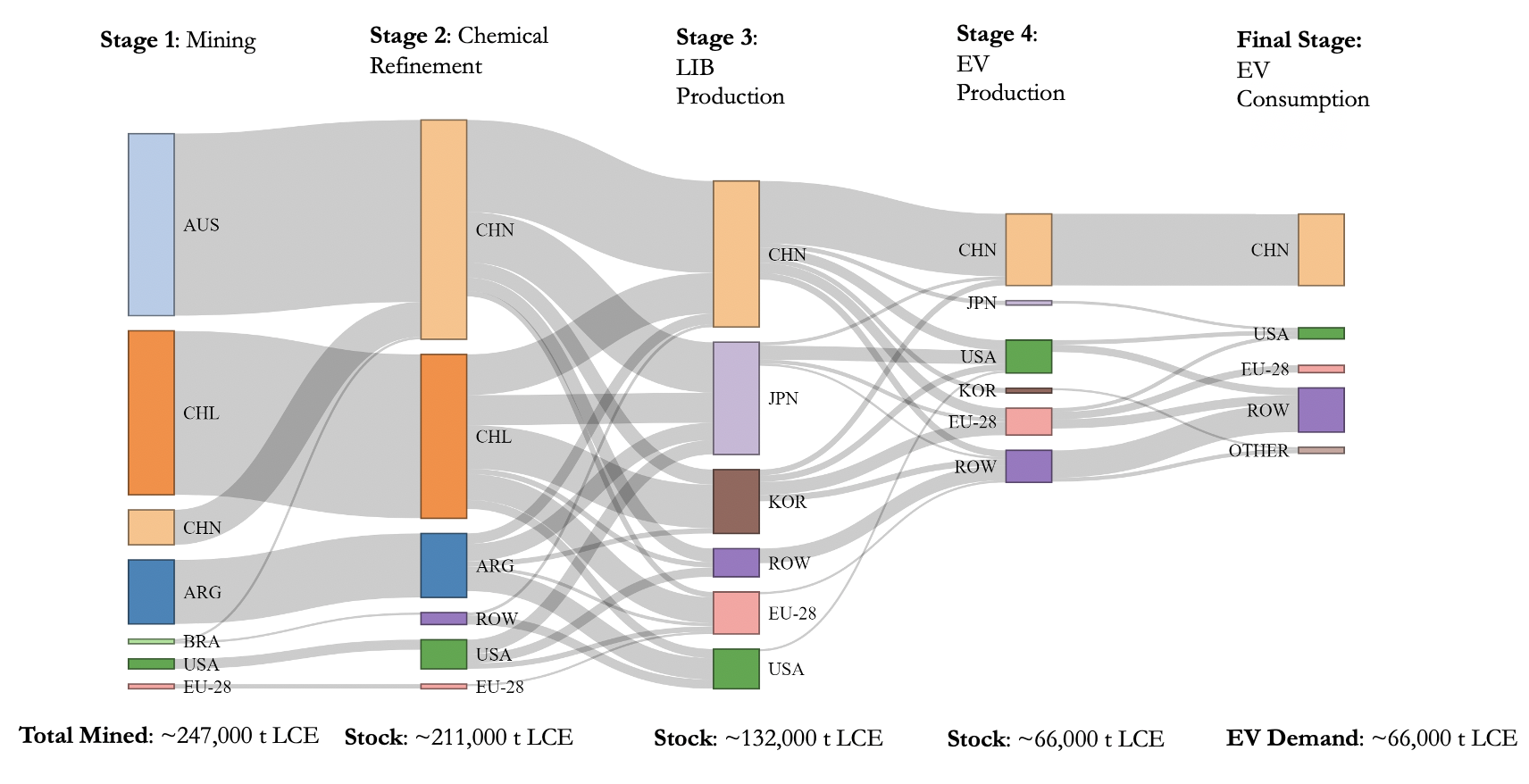 Figure 2: Trade flows in the lithium-EV supply chain in 2017.

The flow diagram highlights the very concentrated nature of the lithium EV supply chain. The two most important lithium miners in 2017 were Australia and Chile with a total production of around 113,000 t LCE and around 75,000 t LCE, respectively. Other major producers included Argentina (∼ 29,000 t LCE) and China (∼ 16,000 t LCE) as well as smaller producers, such as the US, Portugal, Brazil and Zimbabwe. While Australia was the largest ore producer, Argentina and Chile were the biggest brine producers in the world. Aggregated, ore accounted for 54% of world lithium extraction in 2017 (∼ 134,500 t LCE) while 46% of lithium was extracted in the form of brines (∼ 112,000 t LCE).

All countries, but Brazil and Australia, refined their mined brines/ores directly at the mining facility, thus the respective amounts of LCE stayed within the country. China refined almost 50% of all basic chemicals related to the lithium-EV supply chain (∼ 100,000 t LCE worth of chemicals). Chile and Argentina refined all of the produced brines directly at the mining site, putting them second and third in global refinement capacity. However, Argentina and Chile exported nearly all their refined chemicals to the LIB producing countries in Asia, i.e. China, South Korea and Japan. As China was also the largest producer of LIBs, China kept large parts of their refined chemicals within the country.

Roughly half of the global passenger EV fleet (600,000 EVs) in 2017 was produced in China. Europe and the US came in second and third place with a total production of around 300,000 and 200,000 passenger EVs, respectively. Trade of EVs is rather insignificant compared to the production numbers. Larger exports accrue only in Europe, Japan and the US. Target countries are mostly countries summarised in ROW.

From the around 247,000 t LCE of lithium which were initially mined, around 66,000 t LCE found their way into EVs. The rest went into other usages such as powering consumer electronics or the manufacturing of ceramics and glass or was lost in inefficiencies at each stage.

It is not straightforward to disaggregate the water-use impacts specifically stemming from mining lithium as it is often mined together with other raw materials such as copper or potassium. However, using triangulation of different data sources [2], we managed to estimate the freshwater-use associated with the mining of lithium from both brines and ores for production Stages 1 and 2.

Figure 3: Freshwater use for Li2CO3 and LiOH production associated with lithium-EV supply chain in 2017.

The freshwater usage values derived from life cycle assessment (LCA) indicate that the water consumption in ore mining is about 2.5 times higher than in brine mining [4], namely 77 billion litres compared to only 32 billion (Table 1). In total, approximately 109 billion litres of fresh water were used to produce the refined chemicals needed for the EV production. This would be enough to fill some 43,600 Olympic swimming pools with water.

Critically, these quantitative findings are all subject to significant uncertainty and must be embedded within a qualitative debate. First, the conceptualisation of water impacts at the mining stage focused on freshwater usage. Specifically, when lithium is extracted from brines through evaporation, one must ask whether the additional highly saline brine water could also be considered as water. Brine water pumped from the Salar de Atacama in Chile is many times saltier than seawater, hence unusable for humans and animals alike. Yet, following Bustos-Gallardo and colleagues [5] it is important to note that “[t]o the extent that it is provisioned with lithium from the Atacama, the lithium-ion battery value chain (and the ‘clean energy’ it enables) rests on the continued dewatering of salt flats in one of the world’s most arid regions” (p.187). It is difficult to quantify the brine water freshwater balance in the brine reservoirs. If extraction rates become too high, this might cause serious damage to the freshwater reserves, bearing the risk that the two can mix and thereby contaminate freshwater reservoirs.

Our study highlights a growing imbalance within the Lithium-EV supply chain, whereby ‘final’ consuming countries (of EV’s) in the Global North (including China) put significant pressure on the small share of Lithium producers, most of which, Australia notwithstanding, are located in the Global South. Thus, in light of efforts to proliferate and incentivise the transition to EV’s, particularly in the Global North, it seems that while EV’s can have a relatively small local emission impacts in the use phase (depending on the electricity mix), the auxiliary (and implicitly embodied) environmental impacts thereof are highly concentrated at the production and chemical refinement stages. Hereby, increased consumption patterns without corresponding investment into technology for improving production efficiency and sustainability (e.g. increasing recycling rates) can lead to significant asymmetries manifesting as environmental costs. This illustrates the existence of a discrepancy between the promise of consuming ‘clean’ or ‘emission-free’ technology and the corresponding, often dirty, displaced, and neglected, environmental impacts (and related conflicts) needed to produce them.

Contextualising this with respect to the broader frame of socio-metabolic research highlights why a detailed consideration of environmental impacts should be an essential component of material flow analysis. Particularly with regard to the envisaged ‘green transition’ in the Global North, it is important to add an environmental dimension to the traditional, often purely economic analyses of global value chains. In this context, this paper contributes to raising awareness for the specific environmental impacts, misleadingly referred to as ‘externalities’, often ignored and outsourced by the Global North.

Associated environmental pressures in the key countries of the supply chain are very likely to be exacerbated by exponentially rising EV demand in the future. Even conservative estimates for the year 2030 expect the global EV stock to reach 140 million, which would account for 7% of the global vehicle fleet. More ambitious and Paris Agreement aligned scenarios for 2030 estimate the global EV fleet to grow by 36% p.a. to a total of 245 million vehicles. This would imply a 30fold increase from today’s level [6]. Assuming that LIBs are still the dominant battery technology in 2030, this would also induce an exponential growth in lithium demand. Future environmental impacts would then increase in parallel to almost exponentially rising demand, especially if sustainable recycling of LIBs does not gain significant momentum.

[4] SQM. Sustainable lithium for a world in motion. Unpublished presentation 2021.