Mining-induced deforestation in Indonesia. Identifying spatial patterns and synergies with other economic activities

The role of mining as a driver of deforestation is commonly reduced to its limited direct impacts, not acknowledging its capacity to indirectly induce forest loss in interaction with other economic activities. We used 1 km resolution data and expert interviews in order to identify and explain deforestation patterns around mines in Indonesia. We show that there are correlations between increased deforestation and proximity to both mining sites and roads. Synergies between large- and small-scale mining along with widespread biomass industry and infrastructure projects are the most important pattern of mining-induced deforestation, commonly found in the Kalimantan region, Indonesia’s mining hotspot.

Tropical deforestation has extensive and enduring environmental implications. It fuels climate change by depleting carbon stocks, deepens the biodiversity crisis through habitat fragmentation and entails mounting pollution of air and water [1]. Indonesia, classified as a ‘megadiverse’ country, contains much of the remaining tropical rainforest of the Asian continent. In the past 20 years, it experienced an unparalleled soar in forest loss, ranging between 7,000 and 24,000 square kilometres per year and accounting for more than half of total deforestation in Southeast Asia [2].

Indonesia’s natural capital further comprises major mineral resource reserves making it an important producer and exporter of coal, copper, gold, tin and nickel. Recent research and public discourse prominently feature the deforestation impacts of the timber and oil palm industries, small-scale agriculture, as well as infrastructure development, while the role of the mining industry has largely been sidelined [3]. Evidence from the Amazon, however, suggests that mining is a distinguishing element of local deforestation patterns [4].

Aiming to gain a better understanding of the role of mining in the location-specific deforestation processes of Indonesia, we investigated key socio-economic as well as geological variables and identified the dominant physical patterns of deforestation around large-scale mining (LSM) operations between 2000 and 2017. This empirical exercise revealed forest cover changes in relation to the distance of mining sites, covering a distance of up to 50 km. Expert interviews were then employed to expand the empirical basis and to contextualise the observed correlations between driver variables and deforestation as well as the interrelations of these factors.

Michael Thomsen, director of North American Strategic Minerals Inc. and Advanced Rare Earth Research, said in our interview: “There is a lot of infrastructure built up around the mine site. Roads are built. People come in to work at the mine. But you also have to support those people with a whole variety of goods and services. And that by itself will build up a little economic halo around that mine.” This statement alludes to the complex causality of tropical forest loss. It is brought about by a combination of direct and indirect drivers, which may vary significantly between regions. The best way of explaining the role of mining in Indonesian deforestation processes is therefore by understanding its fundamental patterns of interlinked factors acting synergistically.

We found a clear correlation between elevated deforestation rates and proximity to Indonesian mines of any size, but the levels are overall higher among smaller operations. Michael Thomsen described that larger companies, who tend to run high-volume low-cost operations, are generally more professional in minimising their environmental impacts and practise corporate responsibility, not least because they are under greater government scrutiny and want to protect their investments.

According to Michael Tost from the Chair of Mining Engineering and Mineral Economics at Leoben University, Austria, the population draw of LSM operations tends to be between two- and eight-fold the amount of people employed at the site. Areas in the close proximity of mining sites exhibit above-average population densities. They notably correlate with forest loss, presumably as a result of migration movements into formerly sparsely populated forest areas. In that sense, large mines have a larger indirect impact on forest cover than smaller ones. The most significant direct cause linked to this underlying force is the expansion of agriculture, which entails the conversion of forest into cropland. The city accessibility index, along with the distribution of the mid-sized to small road types in mine surroundings, indicates that most Indonesian mines are decently connected to overland transport infrastructure networks. Extractive sites and infrastructure tend to reinforce each other. Investment into the development of either becomes more viable with the presence of the other [3]. While the direct deforestation impact of infrastructure is small in absolute terms, its indirect effects are significant as it catalyses the synergies of mining, smallholder agriculture and the biomass industry [1]. This is particularly the case for publicly accessible transport ways such as roads, which Michael Tost calls ‘multi-use, multi-purpose’. This explains why deforestation significantly correlates with road proximity, an observation underpinning the notion that transport infrastructure plays a key role in the overall picture of mining-induced deforestation in Indonesia.

Coal is the most extensively mined mineral in Indonesia. Our data set covers 239 coal mines [6], which are predominantly located in the Kalimantan region – the Indonesian part of the island of Borneo. Recently, Kalimantan coal mining has expanded significantly due to the implementation of energy policies that aim at increasing the electrification coverage, as well as substantial coal exports to India, China and Japan. The vast majority of these mines are open pits, and they are associated with some of the highest observed deforestation rates both on- and off-site. Typical for coal deposits is their lateral extent, leading to a large surface impact from extraction and associated acid rock drainage. Gold is the second most common resource of LSM (57 mines), also playing a major role in local deforestation synergies through artisanal and small-scale mining (ASM) [3]. Due to the significant amount of people and disruptive techniques involved, such as migratory strip mining, the resulting impacts are extensive [5].

In many respects, the surrounding area of the SDJ mine in South Kalimantan can be seen as a representative example of the most common mine characteristics. According to our data, the open pit coal mine is the 4th largest mine by extraction and exhibits the highest observed deforestation rate at above 70% in its immediate vicinity. Figure 1 provides an overview how distance to road (we show four different road types ordered by size), distance to mine, and deforestation rates relate. Each dot represents a 1x1 km grid cell observation within the area for which the SDJ mine is the nearest extraction site, ranging to a maximum distance of 17 km. 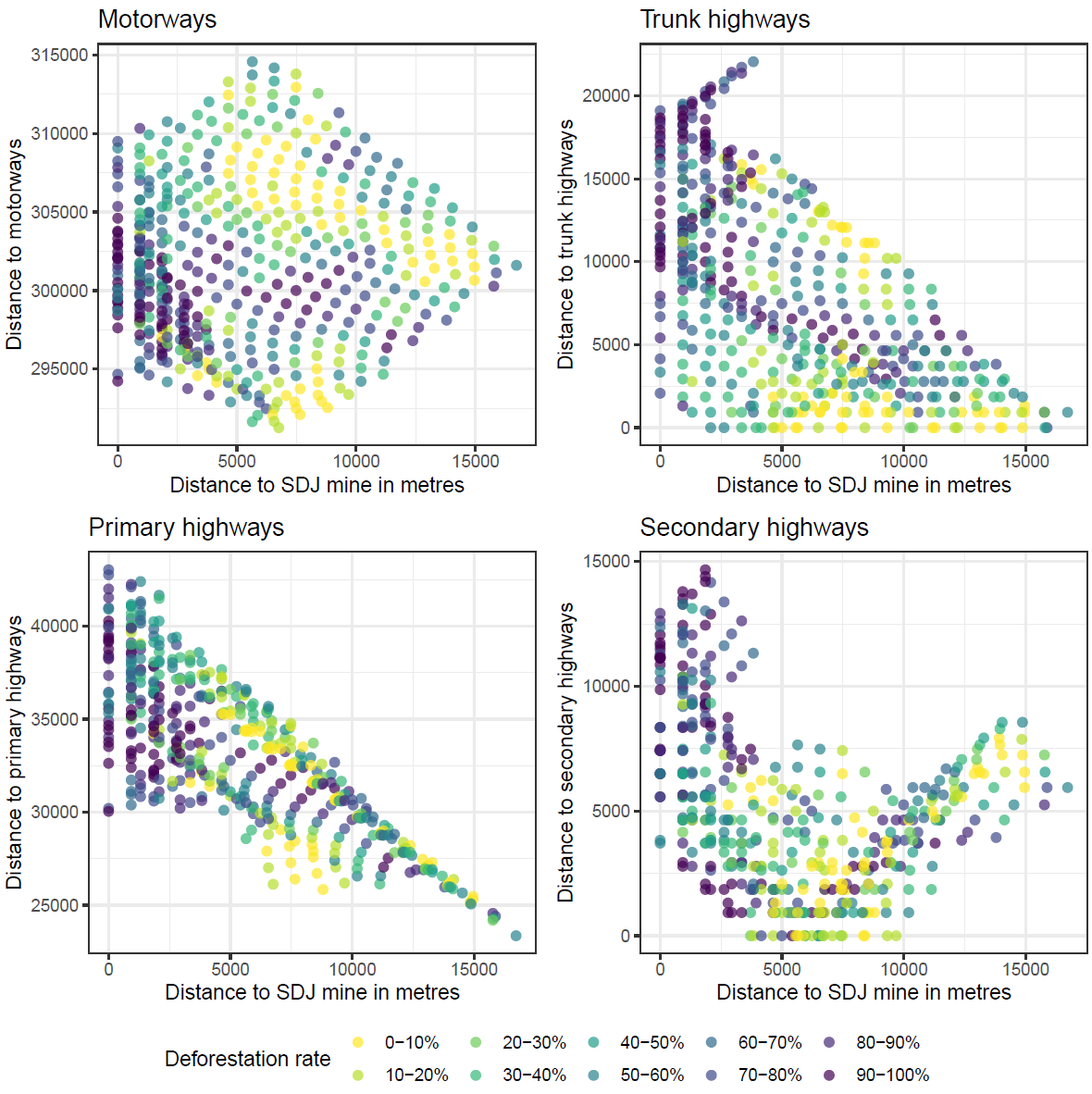 Figure 1: Distribution of road types and deforestation rates around the SDJ coal mine.

The graph reveals that a trunk highway is located in close proximity to the mine and a secondary highway at about 5 km distance. Furthermore, there is a primary highway located around 30 km away from the site, while there is no motorway closer than approximately 300 km. Deforestation rates generally tend to be highest in areas close to the mine and in the case of secondary highways, the area that is close to both mine and road at about 5 km.

Apart from coal, the minerals tin, bauxite, nickel, gold and copper are also linked to high deforestation rates around their extraction sites. They facilitate rural development, causing more limited and isolated yet regionally significant deforestation impacts. The most notable example is the Grasberg copper and gold mine located in the mountains of the Papua Province at an altitude of 4,270 metres. The lack of forest in its direct alpine vicinity is the reason why Grasberg has the lowest deforestation rate of Indonesia’s major mines. As one of the largest and most productive mines in the world and the largest taxpayer in Indonesia, producing around a million ounces of gold a year, major impacts of an indirect nature prevail [7]. According to Michael Thomsen, the influx of almost two million people into the province has resulted in exponential growth of settlements and industrial land use. 96% of the forest loss resulting directly from mine activity between 1987 and 2014 has been attributed to waste management, including the 200,000 tonnes of tailings that are legally disposed into the local river system per day [7]. According to Michael Tost, this practise causes flooding at levees downstream. Figure 2 illustrates how these impacts are spatially spread out, implying that they are not accounted for if we only consider a 50 km radius around the mining sites. 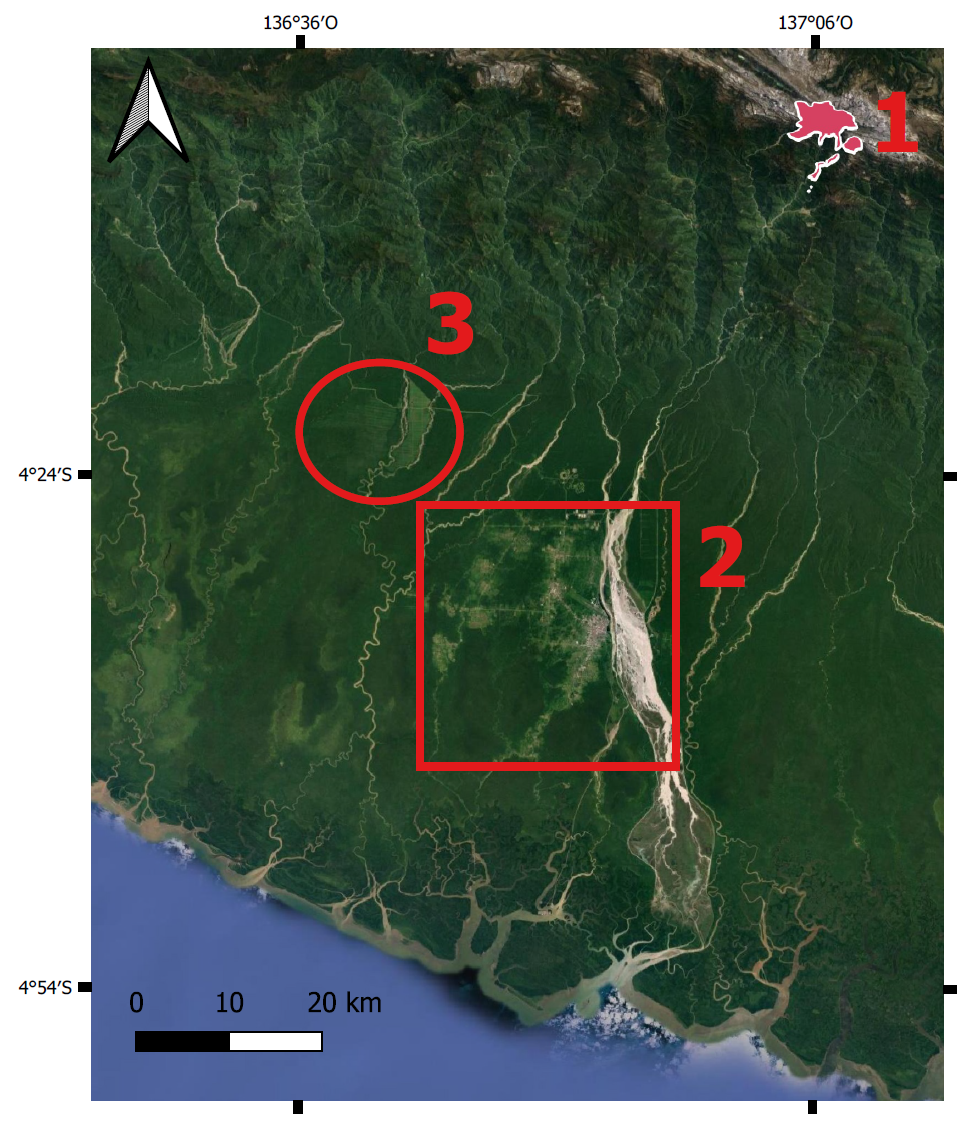 Figure 2: Satellite image of indirect effects related to mining in the Grasberg mine. 1. Location of mine, Papua province; 2. Extensive siltation from tailings and the rapidly growing town of Timika downriver; 3. Rain forest clearance from logging or plantation. Source: www.fineprint.global/viewer.

By opening up previously inaccessible forest areas, large-scale mineral extraction has a significant impact on local deforestation processes in Indonesia. The associated infrastructure and worker settlements facilitate further colonisation by smallholder agriculturalists as well as the timber and palm oil industries. While only having minor direct forest loss impacts, mining and infrastructure development thus function as major underlying forces of land use change. Based on these insights, we conclude that in the given context mine characteristics shape the land use in their surroundings in patterns of strongly interrelated variables, with infrastructure as the central connecting piece.

The most prominent pattern of mining-induced deforestation in Indonesia is found in Kalimantan, where a specific synergy of impactful factors takes place. Extensive large-scale coal mining facilitates small-scale artisanal gold mining through proliferation of transport infrastructure with equally surface-degrading impacts. Both types of mining draw large amounts of people into forest frontiers where other economic activities resulting in further deforestation spread. This reinforcing interrelation furthermore includes the biomass industry, which is the largest direct deforestation driver in Indonesia and exists in symbiosis with large-scale mining.