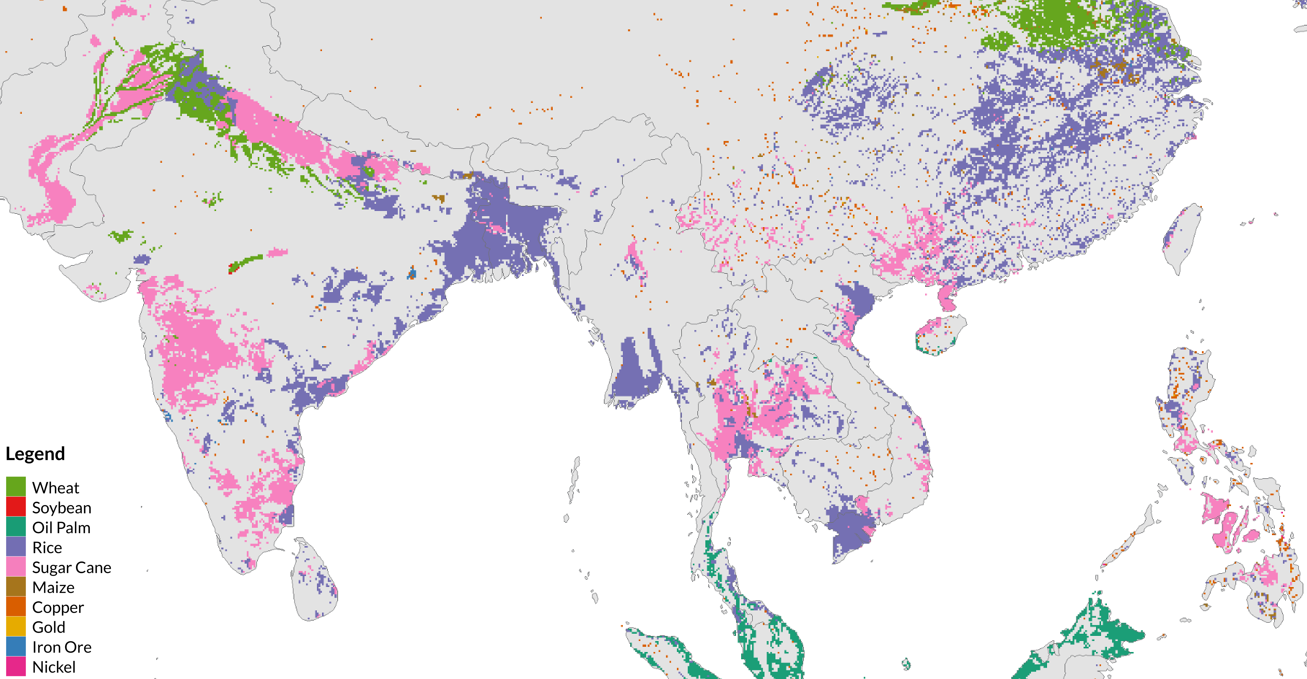 At the European Geosciences Union (EGU) 2018, which took place from 8–13 April 2018 in Vienna, Victor Maus from the FINEPRINT team presented the first pilot maps on global raw material extraction.

A pdf version of the poster can be downloaded here.

Reproducing the global maps via the FINEPRINT GitHub repository

Considering the current rate of economic growth, improving resource efficiency requires a strong decoupling between development and environmental impact. The United Nations Environment Program (UNEP) highlights the scale of the challenge (UNEP 2011) along with the urgency and potential of resource efficiency measures in achieving decoupling (UNEP 2014). However, the growing international flow of goods and services makes the relationship between trade and the environment increasingly important to understand (Liu et al. 2015). Knowledge about international spillovers of resources burdens or environmental impact will help in assessing progress toward national environmental targets and the United Nations Sustainable Development Goals (SDGs) (e.g., Peters et al. [2011] for climate policy).

The rapid growth in trade preceding the 2008 global financial crisis, the subsequent stagnation, and the more recent push to reliberalize global trade relationships in order to help economies recover from recession has put the trade agenda back in the spotlight. Over 50% of goods and over 70% of services traded are used as intermediate inputs to produce other goods and services (Lanz et al. 2009). The average number of borders that an exported good crosses before final consumption is approximately 1.7 (Muradov 2016). This implies that most exported goods are not consumed within the country of import, but are processed further. Previous research has shown that such trade flows have significant effects on the environment. Around one quarter of the global land use is embodied in trade (Weinzettel et al. 2013), as well as over 40% of materials (Wiedmann et al. 2015), 20% to 30% of global water use (Lenzen et al. 2013b), and over 20% of greenhouse gas (GHG) emissions (Peters and Hertwich 2008).

Recently, with the development of time series of global economic models for environmental analysis, studies have started to uncover the dynamics of consumption, trade, and environmental impacts over time, as well as the role of outsourcing in the growth of emissions (Arto and Dietzenbacher 2014; Peters et al. 2011) and materials (Wiedmann et al. 2015). EXIOBASE31 (Stadler et al. 2018) is a global multiregional input‐output (MRIO) model that has been developed to analyze the change in the relationships between consumption, trade, and environmental impacts over time. The database has been developed to assess the major growth in trade since the mid‐1990s, a time when most statistical offices around the world adopted the System of National Accounts (SNA) (UNSD 1993) in order to make international data current and comparable. EXIOBASE3 focuses on economic and associated environmental data from 1995 onward (until 2011 for all indicators, but economic accounts and some environmental accounts are updated to later years) under the SNA and the associated System of Environmental and Economic Accounting (United Nations et al. 2014; Wood et al. 2015). EXIOBASE3 captures economic, environmental, and trade data for all European Union (EU) countries, 16 other major economies, and five rest of the world regions. With data on input‐output (I‐O) transactions, labor inputs, energy supply and use, GHG emissions, material extraction, land and water use, as well as emissions to air, water, and soil, it provides a comprehensive up‐to‐date coverage of the global economy. EXIOBASE3 provides the first time series with adequate disaggregation of the agricultural, forestry, and mining sectors for proper consideration of the land, water, and material pressures related to these sectors, as well as a detailed division of energy extraction and transformation industries. This puts EXIOBASE3 in a unique position compared to other existing MRIO databases, such as Eora or WIOD (for a comparison of MRIO databases, see Tukker and Dietzenbacher [2013] or updated results on www.environmentalfootprints.org).